One fine day a few years ago there was a knock on my door and I opened it to a FedEx delivery man, a commonplace event in the US, but in Britain a rare event indeed, and I was intrigued by it.  The plastic envelope gave me no clue except that on the customs declaration it said “scrapbook”.  It seemed a bit bulky for a normal scrapbook, and I opened it carefully and with huge anticipation.

Inside, a leather-bound volume.  It was indeed a scrapbook, but an old one, in poor condition.  The gold-tooled leather binding was scuffed at the corners, and very fragile.  The card which accompanied it was from Ned Crouch, director of the Clarksville Museum at the time of my first visit there.  “This scrapbook really should remain with you” it said.  The flyleaf bore an extravagant signature:  “Maude T Dunn”.  It was the Dunn family photograph album.  Its pages are full of sepia-toned prints of the young family, mostly of the baby Elsie during the first years of her life, with an equal number of shots of railway lines and railway bridges (Seely was, after all, a railway man).

Many of the images are so faded as to be indistinguishable.  In 1883, Eastman Kodak introduced a dry gel paper as a medium on which to capture images from a light-tight box, and the Eastman-Kodak camera brought photography to a larger public.  In 1893, when Maude Dunn was taking pictures of her baby daughter and young husband,  the process had been refined and the Kodak camera was being marketed with the slogan “You push the button, we do the rest”.  Even so, photography was an expensive hobby, and the number of snaps in the scrapbook bears testimony to the relative prosperity of the Dunn family. 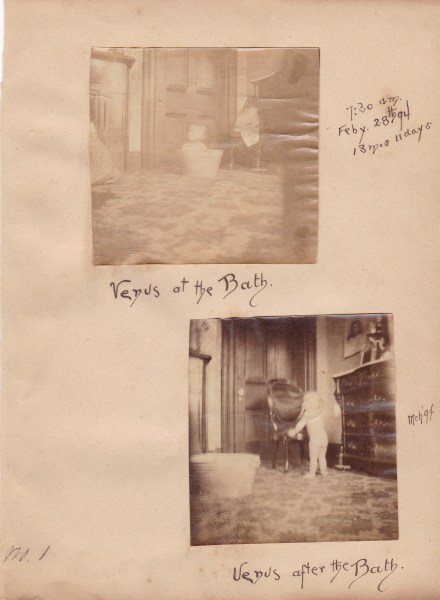 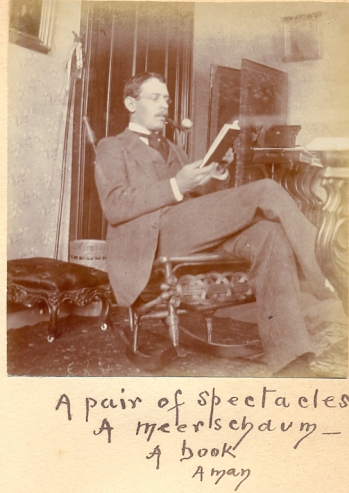 Next week, we shall take up the story at the point at which Elsie Dunn and Frederick Creighton Wellman leave New Orleans for the next chapter in their lives.